Having been informed the beacon was active as of 4th November, I did some path profiles using Mike Willis's software http://www.mike-willis.com/software.html which gave me two local sites to try near Berkeley & Sharpness. Both line of sight and about 40km distance. Nothing was heard from either so on Sunday 6th November I went to Birdlip at about 11km line of site, still nothing heard so I suspected the beacon was not functioning. On Thursday 10th I went to site with the beacon team at Cleeve Hill. Keith (GW3TKH/P at Cefn-y -Gelchen) and I first worked each other on FM at 75km on 47GHz while the guys were looking at the keying line at the beacon. After some testing and small changes the beacon was then heard (at 10m or so!). I then decamped to Birdlip (IO81WU80 where the beacon was heard 599). I then revisited the Sharpness site IO81SR23 where the beacon was again easily readable at 569.

Video from IO81SR23. Frequency shift is FT817 drift. Both the beacon & transverter are GPS locked.

Keith GW3TKH and I have more or less identical 76GHz transverters (built by Keith). First tests were made from the Foxhunter car park on the Blorenge to the lower car park (about 1km) early this year that was extended to 3km later the same day. We failed on a 40km path over the Severn but succeeded on a 17km path from Newnham on Severn to Frocester Peak. 76GHZ seems a lot harder than 47GHz! Best DX for me so far is Cefn-y-Gelchen - IO81LS to Birdlip - IO81WU working Roger, G8CUB/P.

Power is likely to be in the uW range, Hope to measure it in the near future 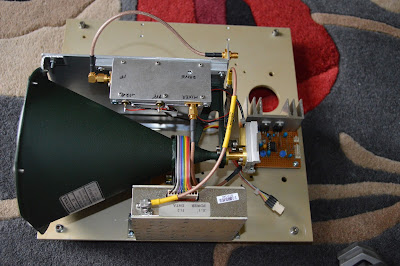 Internals of the transverters
Posted by Pete, G4HQX at 18:13 No comments:

As Keith,GW3TKH and I were going to Jersey to take part in the July 5.7GHz/10GHz contest, we decided to take our 47GHz equipment and try making a contact between Jersey and Guernsey. Path loss predictions showed that the path should go quite easily if we could find each other's signal. As it's now the holiday season the ferries were full and the only chance we had was Friday although the weather forecast was dreadful. I got set up late morning on Guernsey operating as GU4HQX/P and started listening for Keith GJ3TKH/P. We were both locked to 10MHz references and after a couple of minutes found Keith's signal. After peaking both antennas we worked on FM with 59 signals both ways. I then had a quick QSO with Robin GJ3TKF/P for his first contact above 23cm! and a quick 10Ghz contact with Keith using open waveguide as his antenna. As soon as we finished the heavens opened and I packed up after a successful mini expedition! 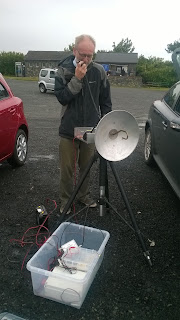 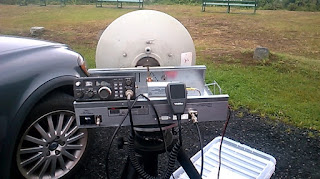 Close up of my 47GHz equipment 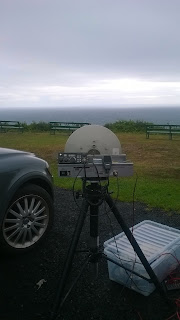 Not the first G/GW Contact on 47GHz but my first contact with Keith GW3TKH/P,
again from Coaley Peak Viewpoint in Gloucestershire to Wenault Hill, Cardiff. Equipment at my end was a DB6NT transverter & Oscillator - not frequency locked as I had forgotten the lead! Power output at my end was about 150uW into a 40cm dish. Keith was running about 100mW or so into a slightly smaller dish and frequency locked to a Rubidium source. After 5 minutes hunting around in frequency & azimuth I heard Keith's test transmission. Having peaked our dishes we exchanged 53/58 reports on SSB over the 67km path. All done in about 10 minutes but very satisfying as the path was slightly obscured at the Cardiff end by treetops.
Posted by Pete, G4HQX at 18:30 No comments:

First QSO on the new 2300MHz band today with Keith GW3TKH/P. The path was between Coaley Peak, Gloucestershire and Wenault Hill, Cardiff. Equipment at both ends were recrystalled DB6NT G2 transverters, 1W to yagi antennas. Signals 59/59, only a short (67km) path but at least proves the equipment is working ok. Maybe the first G/GW  contact on the new band!
Posted by Pete, G4HQX at 20:45 No comments: